Father’s Day is soon- this weekend in fact! In honor of the dads of the world (and any dude who rocks cool knitwear!) here’s a roundup of some of our favorite knitting patterns for guys! 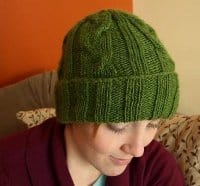 This men’s cabled hat pattern by Shana from Needyl will keep the wearer nice and cozy for the winter. It’s an easy pattern, great for practicing cabling, and great for dad! Get the pattern here: http://www.allfreeknitting.com/Mens-Knit-Hats/mens-cabled-hat-pattern

If you want to tackle something more ambitious, this Aran cardigan, aptly named the Dad’s cardigan, would be a good bet. The look is classic, but the intricate details make it special. Try it out:
http://www.yarnspirations.com/pattern/knitting/dads-cardigan

If your dad is more fashion-forward, try a more unique project- like this knit tie by Vickie Howell. It’s an easy project that definitely makes a statement. Check it out:
http://www.yarnspirations.com/pattern/knitting/family-ties-skinny-tie