This past Sunday, I was spending a relaxing evening knitting and drinking wine while preparing for my week. I haven’t watched television in a long time so I could focus on MY BUSINESS. Because of that, I missed the Emmy Awards but when I looked on social media all I could see were tweets and Facebook posts about the phenomenal actress Viola Davis and her acceptance speech for taking home the Outstanding Lead Actress in a drama series…and for being the first African-American woman to be acknowledged! We love you Viola Davis!

Davis began with a quote from Harriet Tubman. “In my mind, I see a line. And over that line I see green fields and lovely flowers and beautiful white women with their arms stretched out to me over that line but I can’t seem to get there no how. I can’t seem to get over that line.” Davis then said, “The only thing that separates women of color from everyone else is opportunity…You cannot win an Emmy for roles that are simply not there,” Davis said. (Watch Viola Davis’s full speech HERE.)

I was profoundly moved. Now, many people will agree and others will say that all women have had struggles in any industry and are still trying to fight their way through the glass ceiling. That may be true but put race on top of gender, and there is a whole other story to tell.

Look at the yarn industry. YES, I said it! The yarn industry has hundreds and thousands of yarn companies that make gorgeous yarn. I know this because 1).I am a yarn business owner, and 2) I have amazing yarn from other companies in my yarn stash. The yarn industry also has amazing knitwear designers, really cool magazines, and wonderful social networking websites. We love you Ravelry!

Do you get it? For most of you who knit and understand the knitting community, you wouldn’t be able to complete this list because there is an EXTREME lack of diversity in the yarn industry.  And here is the usual response I get after bringing up that point: Well minorities do not knit….

As a knitter and African-American woman business owner in the yarn industry, I know many minorities that knit and I know some minority knitwear designers who I have met at shows – and I know there are more.  Yet I have yet to find a yarn company or indie dyer in addition to myself who has attended a local or national show. In fact, between my attendance at the The National NeedleArts Association trade show in 2014 and the recent Stitches Conference, I was the only African-American business owner at these two shows. Why is this? I am sure there are other minority business owners out there. And I am not just talking about African-Americans. Yes, I am black but I know Latinos, Asians, and Africans who knit or crochet. Why are we not represented well in the knitting community?

As whole, I believe the yarn industry needs to do a better job at addressing the lack of diversity in our community especially among knitwear designers, speakers, and images in magazines, and by reaching out to minority-owned yarn stores and dyers. We live in a diverse society and social media has changed the way that we communicate and connect. Since knitting magazines started out way back in the early 20th century, white men and women of grace those pages of magazines during a time where race and racism was extremely prevalent. Yes, it has changed slightly over the years but the racial disparity of the past continues to reflect what we see in the present. There are systematic racial issues that the yarn industry needs to address.

I can go on Ravelry, Instagram or Facebook and see diverse groups of people who have similar interests and I follow them online. I should also be able to see a representation of people from all backgrounds at conferences as speakers, teachers, owners, and designers. They are out there but individuals at the top of the yarn industry need to make the effort to want to make these changes. Attitude does reflect leadership.

And just because you see people in the knitting community who look like you and who have the same interests, it does not mean that there isn’t room for improvement. I feel that the lack of diversity in the industry is also because those who see themselves represented turn a blind eye.

I said on a recent Facebook post that I see Ms. Tubman’s quote that Davis eloquently repeated. I see the line in the yarn industry as there are many white women represented in every aspect of the industry while minorities and men are left out.  I ask myself “what am I trying to do in becoming a national brand?” Yes, it is a huge undertaking and I believe in my product. I believe it is unique and different. I am speaking to urban knitters and crafters. I am here to stay and crossing the race line will be hard and arduous but I am in it for the long haul. WHEN I CROSS THAT LINE, I WILL BRING WITH ME OTHER PEOPLE WHO REPRESENT THE COLORS OF THE RAINBOW!

How can the yarn industry address the lack of diversity in our industry? Please join the discussion on Lady Dye Yarns Ravelry PAGE or Facebook PAGE 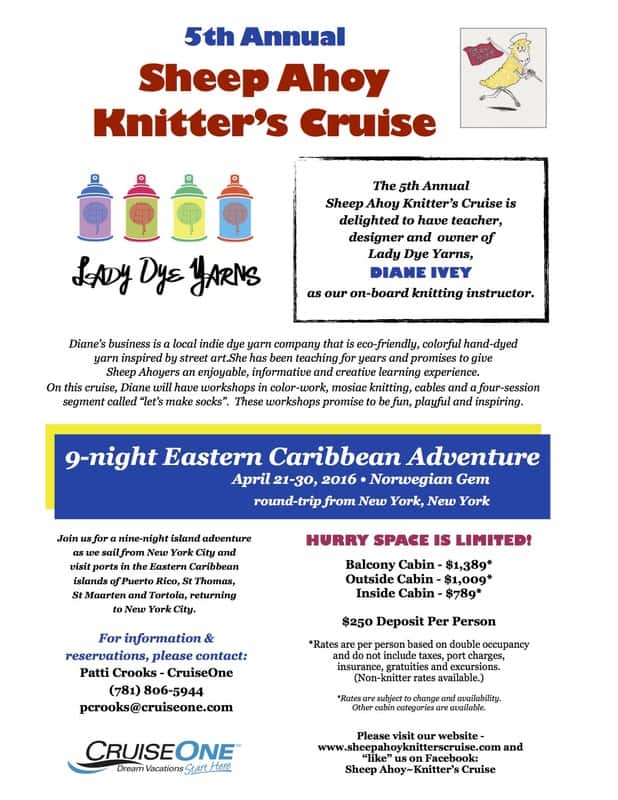